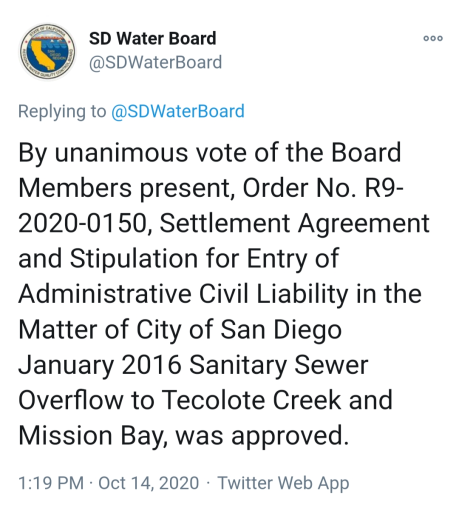 In a unanimous decision following two hours of public testimony, the San Diego Regional Water Quality Control Board voted 6-0 in favor of a Supplemental Environmental Project (SEP) that will enable the ReWild Mission Bay “Wildest” plan for wetland restoration in northeast Mission Bay to be considered at the same level as the city’s own plan.

Today’s decision marks the culmination of a two-year effort by the ReWild Coalition since the ReWild Mission Bay Wetlands Restoration Feasibility Study was released to the public in Sept. 2018.

The SEP is intended as mitigation for a sewage spill along Tecolote Creek on Jan. 5, 2016, that ultimately discharged 6.7 million gallons of sewage into Mission Bay, after a landslide near Mt. Ashmun Drive in Clairemont “exposed, undermined and collapsed a 30-foot section of the Tecolote Canyon Trunk Sewer,” according to the San Diego Union-Tribune.

Backed by an impressive coalition of community planning groups, businesses, environmental outlets, labor unions, and faith-based organizations, the adoption of the SEP earmarks funds for the City of San Diego to develop a new, wetland-rich planning alternative in the ReWild area of concern that will benefit the ecological health of Kendall-Frost Marsh Reserve, Rose Creek, and De Anza Cove.

Andrew Meyer, conservation director at the San Diego Audubon Society and campaign director for ReWild Mission Bay, said today’s vote is important, but there’s more work to do. “This is a big win for ReWild Mission Bay project and the 46 members of the ReWild Coalition,” he said. “But while this enables the city to create a new alternative with more wetland in the ongoing De Anza planning process, it doesn’t guarantee the city will choose it. That’s where our focus has to go now.”

ReWild campaign coordinator Tommy Hough echoed the need for a renewed effort at City Hall, but also noted what he described as the “unimpeachable basics” of the campaign. “This is about taking steps to ensure resiliency to climate change and rising sea levels, improve water quality, restore access to our shared public places, ensure greater habitat for vulnerable and threatened species, facilitate carbon sequestration, and add environmental justice components to the Mission Bay Park experience relative to the area’s lengthy history of Indigenous use.”

The need for cleaner water in Mission Bay, and the vital role wetlands play as green infrastructure that filters toxins and pollutants, was noted by several speakers who referenced the poor water quality in the Campland area of Mission Bay at the mouth of Rose Creek, which recently “flunked” Surfrider’s Blue Water Task Force for water quality.

According to Laura Walsh, policy coordinator with the San Diego County chapter of the Surfrider Foundation, Surfrider volunteers have tested water at Campland every week for the past two-and-a-half years and found 22 percent of samples at the site do not meet water quality standards for safe recreation. “This past week, our sampling at Campland showed bacteria counts that exceeded safe water quality standards by 500 percent,” said Walsh. “Today’s decision by the water board will help us begin to clean up the water in Mission Bay.”

Board members noted during the meeting they were impressed by the number of supporters who spoke, and that the turnout gave them confidence to support the SEP proposal knowing ReWild Coalition members would be following the process through to completion. As board chair Henry Abarbanel said in his closing remarks, “This is more than just a SEP, it’s an approval of a goal.”

ReWild Mission Bay is a project of the San Diego Audubon Society and our ReWild Coalition partners to enhance and restore wetlands in the northeast corner of Mission Bay, thereby creating new opportunities for wildlife to thrive, and for San Diegans to enjoy nature in our collective backyard.

[…] Read why this matters to the vision of restoring wetlands at the mouth of Rose Creek. […]